Burton is the main village in the parish of Nettleton, Wiltshire.

Archaeological evidence indicates the area has been inhabited for millennia.

The village is situated in a slight valley at the junction of three roads. Named in 1244, Burton means ‘farm by the borough’. The village lends its name to the brook running through it, which rises in Tormarton, Gloucestershire, and is a source of the Bybrook (also known as the By Brook), a tributary of the River Avon.

A map of 1821 shows the plan of the road from the west end of Burton running south easterly and arriving at the Salutation Inn in the parish of Littleton Drew. The map indicates around 18-20 dwellings at Burton, and shows field names, such as ‘Horsedown’ on the southern side of the road and ‘Littleton Field’ to the north.

At one time, Burton had two pubs, The Old House at Home (still in operation) on The Street, and further east along the same road, the Grade II listed 16th century free house, The Plume of Feathers. Since the beginning of this century, the latter is now in domestic use and renamed The Old Plume. 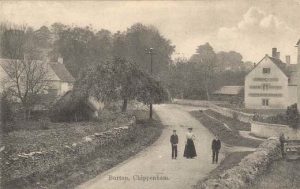 The Plume of Feathers (right of the picture)

St. Mary the Virgin of Burton and Nettleton church sits on a rise overlooking the village and is Grade I listed. Next door, the Rectory, parts of which date from 1605, was sold in the mid 20th century and is now a private residence. 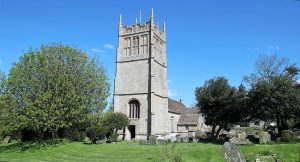 Also listed is Chestnut Cottage formerly the forge. Early Kelly’s directories mention a Post Office, a maltster, grocers, drapers, carpenter, blacksmith, publicans and numerous farmers. By 1920, these had been joined by a haulier and a coal merchant.

In 1921, the Rev. Brooks Rickards, the Rector of Nettleton, built a village hall in army hut style on the Nettleton Road, just south of the turning to Church Hill. This land is now the site of a children’s play area managed by the Burton Community Association.

Some local authority housing was built post-war, with a series of more modern housing developments taking place between the 1980’s and 2010’s. Today, Burton remains a small village of 112 households.

We have a growing collection of historical information about Burton and the surrounding area, from ancient history to more recent times. Find out more here.

The information on the church is hard to find. It has been my experience that many people vivsting Burton are tracing family history and the church is therefore the main interest. They are not always completely computer savvy so having the church on its own page is good.